We are doing projects in mission mode and have done many projects especially the irrigation projects in 4 years time stated K Taraka Rama Rao here in Hyderabad. He was talking to businessmen in a meeting and said that the Tsipass was a big boon to the businessmen who are setting up business in Telangana.

That continues and now we have grown in leaps and bounds he said. A lot of development has been done and we are on the path of Bangaru Telangana KTR said.

Welfare and development are going hand in hand and this will continue with peoples cooperation he said. KTR was addressing a series of election rallies and he would tour the city this evening. 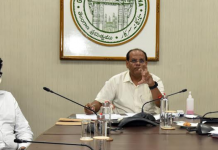