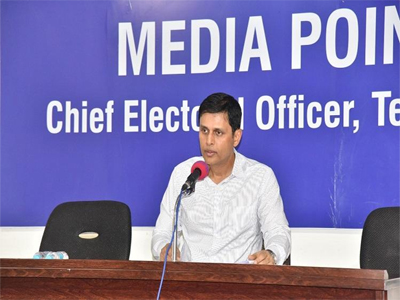 2. The Parties should submit the list of star campaigners along with their biodata

Authorities for their information.

3. The Commissioner & Director of Municipal Administration and State Election Authority is hereby authorized to issue vehicle permission to the star campaigners furnished by the Political parties as mentioned in para 1.

4. The permission shall be given in the name of the star campaigners and also mention the registration number of the vehicle and the period for which the permit is issued and area of operation.

5. The permit may be issued in the format annexed to this notification on a square shaped sticker with suitable adhesive. An attested copy of the permit shall be prominently displayed on wind screen of the vehicle and original be kept by the person for checking by police or any other authorities. The General Observers, Expenditure Observers, Collectors and District Election

Authorities, Municipal Commissioners, Returning Officers and surveillance teams should also be informed such vehicle permissions whenever vehicle permit has been issued to the Star Campaigner of a Political Party of a political party for the purpose of accounting of expenditure either on behalf of Party or the contesting candidates.