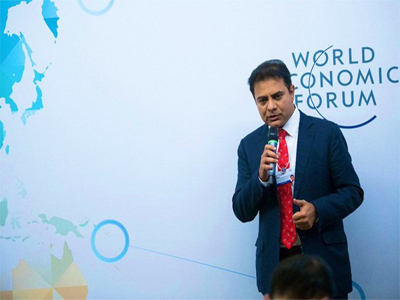 In a rare honor, the organizers of the World Economic Forum have invited Telangana Minister KTR to an exclusive ‘Gathering of World Economic Leaders’ (IGWEL): Keeping Pace – Technology Governance at a Crossroads’ in Davos.

It is worth noting that Minister KTR is the only state-level (provincial) Minister to be invited to this coveted gathering. At the WEF, Minister KTR is granted a special badge with a shiny holographic sticker, which gives entry to the hyper exclusive Davos-within-Davos known as IGWEL meetings.

This badge is given only to the senior government policymakers and head of the states. IGWEL is a gathering which brings the world leaders onto a single platform and encourages them to talk more freely.

The organizers of the World Economic Forum invited world leaders including the Prime Ministers of various countries and National Ministers from various states and provinces.