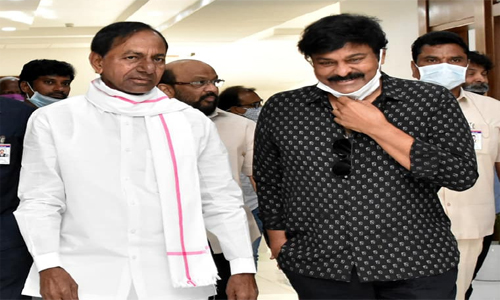 Cinema directors and Heroes today have met CM K Chandrasekhar Rao here at the Pragathi Bhavan and have discussed shootings and also the other production works.

The permissions will be given in a phased manner the CM KCR assured the Heroes. Directors, Trivikram Srinivas, Koratala Shiva and N Shankar, Producer Dil Raju, Heroes Chiranjeevi, Nagarjuna and others have talked to the Chief Minister over the matter.

The Chief Minister KCR assured them that he was for the development o the cine industry in a big way here in the state. Minister for Cinematography Talasani Srinivas Yadav said that it will take another two meetings between the Chief Minister and cine people to resolve the issues.

From June 2 that is the state formation day things are going to be open up or the industry people. Post-production work is already going on and now shootings have to take place.

They are also on the job of discussing the opening of the theatres. Minister Srinivas will also talk to the industry people and hen they would finally sit the Chief Minister KCR to finalise the things for the betterment of the industry.