Ram Charn from Koniela productions and mega family has become a shrewd businessman. Right now he is producing the movie for his father Chiranjeevi. It is learnt that Charan has invested in Saaho produced by UV creations.

There was a time when the producers of UV creations ran into financial issues. At that time Charn stepped in and invested the money required for the production of the movie.

It was kept as secret so far that Ramcharan has invested in the project and has come to the rescue of the UV productions. Now that the movie is ready for release, the point of investment is being made open and Charan will get 10 percent of the profits that Sahoo earns after the release.

There is a good talk for the movie and Krishnam Raju the senior actor called as rebel star has certified that it is 150 percent a sure hit. Sujith the young dynamic director has handled the subject very well and could bring all the seniors together for the success of the movie.

It is being released in 4 languages.

Zibran is the music director and the background score is excellent. Prabhas is also happy that the movie has come out very well. Now Charan has Syeraa and Sahoo for release. Lets hope he will make money from both the movies. 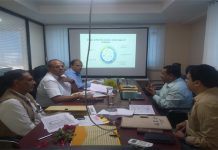