The elected representatives must get trained here in the Centre for Urban excellence. The centre will come up in 2 acres area he announced. All the candidates who would be contesting for the Municipal elections must know about the new municipal act he said. Accountability is important he stated. The district collectors will have a larger role to play.

The Ministers will not have stay power with them on the corruption issues. The collectors will take the final decision. There are no proper burial grounds in the state KCR said. Hyderabad must have about 100 veg and non-veg markets KCR opined. Hyderabad is growing about 500 flights are being operated from the city he explained. Where are the public toilets he questioned?

There are rules for the municipal budget also and 10 per cent must go for the green cover he said. The Government departments are not paying bills he said.

Integrated township development will take place. Hyderabad and Warangal will get satellite townships he announced. Gated communities must also come out to decongest the main cities he said. Municipality, Corporation and HMDA will exist he explained.

Ultimately the new law is for the benefit of the people and to fix accountability on the officials he said. The officials will be removed from the services if found guilty he stated. The Ministers will not have the power to stay the orders he said. 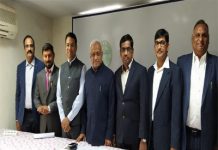